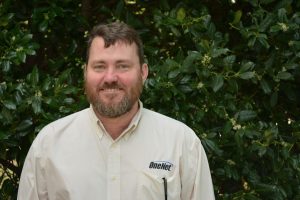 The OneNet team is comprised of an eclectic group of staff with unique stories and interests. As a network technician, Robert Prince contributes to OneNet’s diverse image, too. He was once in a 1970’s G.I. Joe commercial and had an amateur career as a disc golf player. His path towards a career in network communications is unique, but his dedication to his job and passion for OneNet customers is unrivaled.

Prince has been employed with OneNet as a network technician since 2015. As part of the infrastructure team, Prince travels across the state to manage the physical components of OneNet’s network.

Besides earning a national championship as a disc golfer and moonlighting as a child actor, Prince’s career background is in wireless communications. He originally worked as a cellphone technician and a cell and switch technician, where his dog Dessie would accompany him to work. Working with fiber connections on an internet network is a change of scenery for Prince, and he welcomes the new challenges.

“It feels like I’m starting over again, which is exciting,” he said. “There is a lot to learn and opportunities to grow.”

Prince has a calm, thoughtful demeanor, which helps him when working with customers. The infrastructure team meets with multiple customers from different organizations every day, and Prince and his coworkers must have great attitudes and a desire to help others.

“After a job has been completed, I feel positive about the work that I’ve accomplished,” he said. 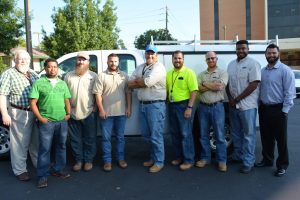 Prince with some of his infrastructure teammates

A typical day for Prince begins early. He likes to drink a big cup of coffee and reflect on the day ahead. He is currently using the extra time to study Juniper and Cisco switching and routing.

Prince grew up in a military family and has lived in many different places, including Germany and Spain. Family is his top priority. He has been married 23 years and has a 17-year-old daughter, too.. His family enjoys traveling together, as well.

His loyalty to his family is also reflected in how he interacts with his OneNet teammates. He finds inspiration in making others happy and values integrity above all.

“My proudest moments are when we complete a job and everyone feels positive about what we accomplished,” he said.

If you’re ever in a pinch and need a disc golf teammate or just a dedicated coworker, Prince is a really good choice. His love for his work and passion to learn more is infectious.

Posted in Staff Spotlights
← R&E Networks Offer Value Beyond the InternetOneNet is currently experiencing a issue with our SNAPP monitoring service.*RESOLVED* → 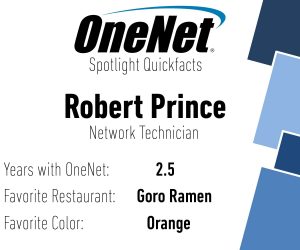