On the most basic level, any communications/public relations job is knowing what, when and how to say something. By that assumption, anyone with the right mixture of common sense, discretion and access to Google could do it.

Unfortunately for anyone that lists “people person” as a skill on their resume, the job skills required for this profession go beyond being outgoing.

I’ve always suffered from having a head the size of a ten-gallon hat. Fortunately for myself and everyone around me, I keep my ego quiet enough to get by unnoticed. But I came into my internship at OneNet with an unearned confidence in my abilities.

In the past, I’ve interned and worked for magazines and television stations. So on some scale, I thought I would come in and wow everyone like some sort of PR-intern version of Kevin Durant.

When I started working for OneNet 10 months ago, the communications department was only two people — me and my boss, April. I thought if I just wrote features on customers and the monthly staff bios that would be enough to impress. And it worked a little bit.

I received good feedback on my articles. However, the gratification I garnered from just writing and doing other peoples’ projects wore off fast, because I saw how much heart and brains the OneNet leadership invested in their work.

They encouraged me to develop and manage my own projects. But the enterprising spirit didn’t strike me until I started working on a feature about Butner Public Schools, which is in the underserved, rural community of Cromwell, Okla.

The school won a grant for more than 200 iPads and educational software, but was unable to use them due to low broadband speed.

I witnessed how this tiny school was transformed into a beacon of its community with a little extra juice in its connection after OneNet was able to affordably increase its broadband speed.

I became passionate about getting Butner’s story out and took charge of the feature.

Butner was where I learned the difference between doing a job for my own pride and passionately contributing to something bigger than myself.

Since that story, I have been actively pitching and creating ideas for a multitude of communication projects.

Under April’s mentorship, I received pragmatic feedback, which has helped me tangibly improve my skillset.

Even though those skills will ensure my career, I honestly think the most valuable lesson I’ve learned at OneNet is that passion can be found anywhere.

The broadband connection isn’t a pretty cause. It doesn’t really evoke fire inside people like other, more politicized issues.

But at the risk of sounding really sappy, OneNet staffers really care about the people in this state. I’ve met employees who don’t deal with the public at all, but they take pride in the fact that what they’re doing is a small part to helping others.

As someone who has worked in nearly a half a dozen media outlets, that passion is rare and not to be taken lightly.

I wish everyone at OneNet the best of luck in the future. 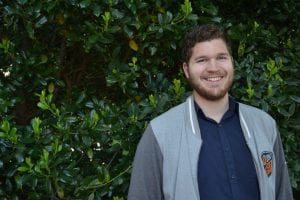 "I honestly think the most valuable lesson I've learned at OneNet is that passion can be found anywhere." -Micah Parnell 2014/15 Outreach Intern