A group of middle schoolers has created an augmented reality game that you play on your wrist.

Loveworks offers many opportunities for students to discover their passions, but one way is through their growing number of student-led companies. Currently, there are three of these companies, Real Enterprises, Real Kitchen and Real Tech. Real Enterprises is a small business program that teaches kids about entrepreneurship. Real Kitchen combines culinary and business skills, and students make and sell their own salsa. Real Tech is the newest program and the parent of Wristworld. 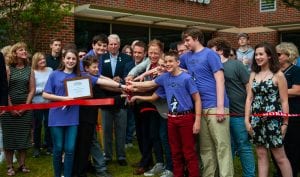 al Tech was formed through a partnership between Loveworks and Trifecta Communications. The goal in creating Real Tech was to build something that reflects a Silicon Valley tech startup. Ten students were chosen for the program, and all that was left to do was pick a project. The students chose to create a game that could be played on a wristband. Trifecta provided the AR resources and helped bring the students’ ideas to life.

There are four unique Wristworld wristbands for customers to choose from, each with a different level that is holographically projected from the band. The player activates the game by scanning the wristband with their phone. Wristworld is nonlinear, meaning the bands can be played in any order, but all four levels need to be completed to beat the game. The game can be experienced in two modes, game mode and wrist mode. Game mode occurs with the wristband laying flat on a surface like a table. Wrist mode takes place on the wrist and can project the player’s character in 3-D.

One difficulty the team faced was that there was no budget for Wristworld, so they ran a Kickstarter campaign that raised $23,000. The hard work paid off, and Real Tech recently signed a deal with OnCue to sell Wristworld wristbands in OnCue stores. The game is doing well, with 4,000 wristbands being sold so far.

Real Tech and Wristworld’s success has greater implications for Oklahoma. The team traveled to a New York toy show to show off the game and were met with approval and excitement from the attendees. Not only did industry insiders find the game interesting, but they also loved the students’ story. Many found it surprising that the group was from a small state like Oklahoma. This should serve as a reminder to us that Oklahoma can absolutely be at the forefront in technology.

OneNet Executive Director Vonley Royal is excited about Loveworks’ experiential learning approach. “Loveworks’ approach to education is exciting because it shows adaptability to the evolving education system,” said Royal. “Information is now more widely available than it used to be, and students need new ways of learning. Methods like experiential learning help to hold students’ interest.”

Programs like Real Tech are an excellent opportunity for Oklahoma to get its young people into STEM early. They are an illustration of OneNet’s Next-Generation Classroom initiative because founders think outside of the box to help students become interested in subjects that they might never have been exposed to otherwise. Using modern technology like AR is a way to make subjects more concrete and interactive. Real Tech’s success is one of many examples that show us today’s students learn best through interactive lessons and projects.

When wrist mode is activated, the player's character is projected in 3-D. 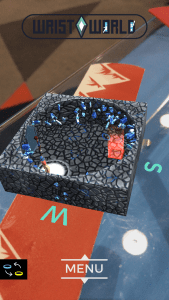 The game can also be played in flat mode on a horizontal surface.