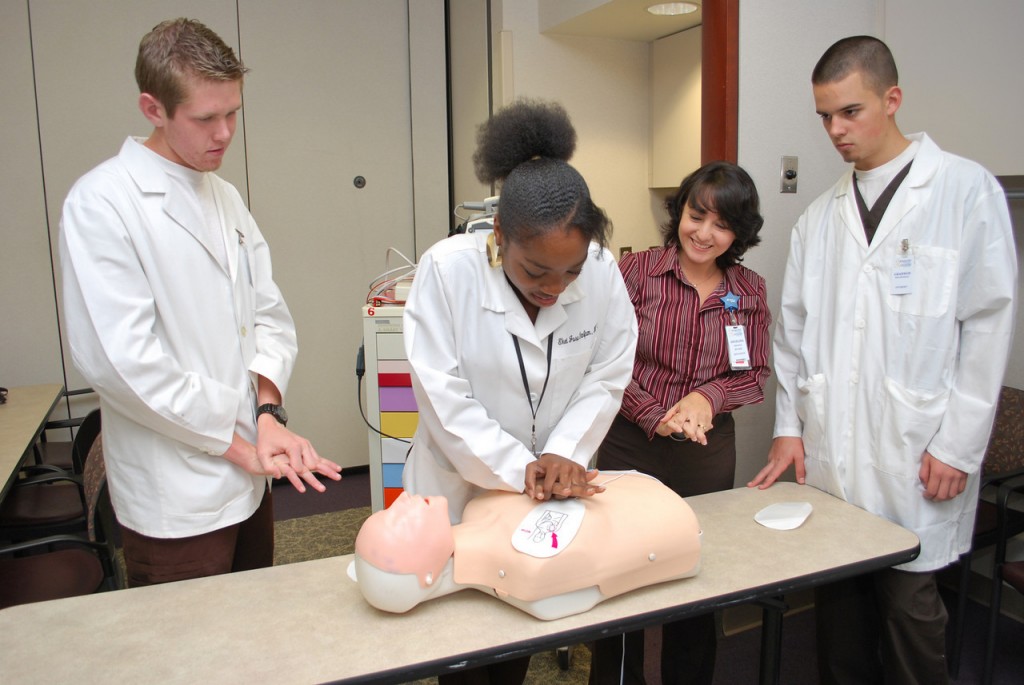 Stories like Monsita West’s are the reason the Oklahoma Association of Career and Technology Education (OkACTE) exist.

In 2002, West decided to go back to school after a 27-year hiatus. The high school dropout had dreamed of being a nurse since she was in seventh grade.

West’s doctor discouraged her from enrolling in the program, because he thought the stress would worsen her skin condition. The condition affected more than 90 percent of her body and severely limited her vision. But she was determined, even though she could only study a few hours at a time before her eyesight would give out.

In 2004, West graduated from WWTC and began working as a nurse. After getting a taste for education and the doors it opened, West began pursuing her registered nursing degree.

Unfortunately, West became a single mother in 2008, when her husband died trying to rescue their 3-year-old daughter from drowning.

West carried on; she would study at night, comforting her daughter in one hand and reading a textbook in the other.

She became a registered nurse in 2010. Today, she works as a surgical nurse, while pursuing her bachelor’s in nursing and raising her children.

All of this might not have been possible in another state with a lesser career and technology (CareerTech) education system.

Oklahoma has an internationally recognized CareerTech education system, which is in part due to OkACTE.

The professional association advocates and works to make sure the state has a strong CareerTech system, according to OkACTE Executive Director Patrick McGregor.

“In most states there is no unified CareerTech system,” McGregor said. “Instead, in many states like Texas, they roll CareerTech up with community colleges.”

Oklahoma’s innovative, independent system allows it to offer a much more expansive catalog of courses from business to aeronautics.

“We provide consecutive schooling, skill development and career development to more than 450,000 Oklahomans,” McGregor said. “In fact, our graduates contribute more than $3 billion to the state’s economy every year.”

Enrollment in CareerTech ranges from high school students working on dual credit for college, to adults looking for a career change and every shade of grey in between.

OneNet recently upgraded OkACTE to a 100 megabit-per-second connection. This connection is monitored around the clock, and if an issue appears, it’s dealt with immediately.

“Thanks to OneNet, our speed and services have increased tenfold,” McGregor said. “Our network is extremely secure and stable too.”

The association’s higher bandwidth connection was made possible through a partnership between OneNet and the Office of Management and Enterprise Services (OMES). OneNet works closely with OMES to find solutions for increasing the availability of high-speed broadband to educational institutions across the state. A goal of this partnership is to ensure Oklahoma’s students can fully participate in today’s digital learning environment.

“Quality education is more accessible than ever thanks to the Internet,” OneNet Executive Director Vonley Royal said. “OneNet is committed to enabling every student in Oklahoma to have a seat in the classroom of tomorrow.”

Beyond the new connection for OkACTE, OneNet provides high-speed broadband to 53 of the 59 CareerTech campuses throughout the state. The services OneNet provides these campuses include Internet, MPLS network virtualization, colocation and web hosting.

OneNet is enabling the CareerTech system to meet its mission critical needs by providing the technology necessary for the association and its members to deliver CareerTech education across our state. The value it creates for students like West is life-changing.

“OneNet strives to provide affordable Internet and services to empower students from every background,” Royal said. “Every time OneNet enables a client such as OkACTE to achieve its mission, OneNet comes one step closer to fulfilling its mission of advancing technology across Oklahoma.”

“Every time OneNet enables a client such as OkACTE to achieve its mission, OneNet comes one step closer to fulfilling its mission of advancing technology across Oklahoma.” - OneNet Executive Director Vonley Royal