Collaboration and cost savings are hot topics on the minds of Oklahoma’s research organizations during a time of reduced budgets. One way our state is combating these issues is by participating in the Great Plains Network, which is celebrating its 20th anniversary in 2017.

The Great Plains Network, known as GPN, is a strategic alliance of eight member states in the Midwest that offers shared cyber infrastructure to provide connectivity for higher education and research organizations across the United States. GPN partners with state networks in the member states and high-performance computing centers to deliver broadband up to 100 gigabits-per-second to these research organizations. OneNet provides that connectivity at the research universities in Oklahoma.

“Membership in GPN is an invaluable resource to Oklahoma’s researchers who are moving massive amounts of data daily,” said Vonley Royal, executive director for OneNet. “This consortium of member states assists in bringing in research dollars through grants to Oklahoma and offers an opportunity for building communities of interest in each state.”

As the largest regional network in the United States, GPN covers more than 430,000 square miles through its member states—Oklahoma, Missouri, South Dakota, Nebraska, Kansas, Arkansas, Iowa and Wisconsin. The network was also one of the first GigaPoP connections in the United States for Internet2. A GigaPoP is a point of presence that allows for gigabits of traffic to be passed. Through this connection GPN brought Internet2, a 100Gbps network dedicated for the sole use of research and education organizations, to Oklahoma. 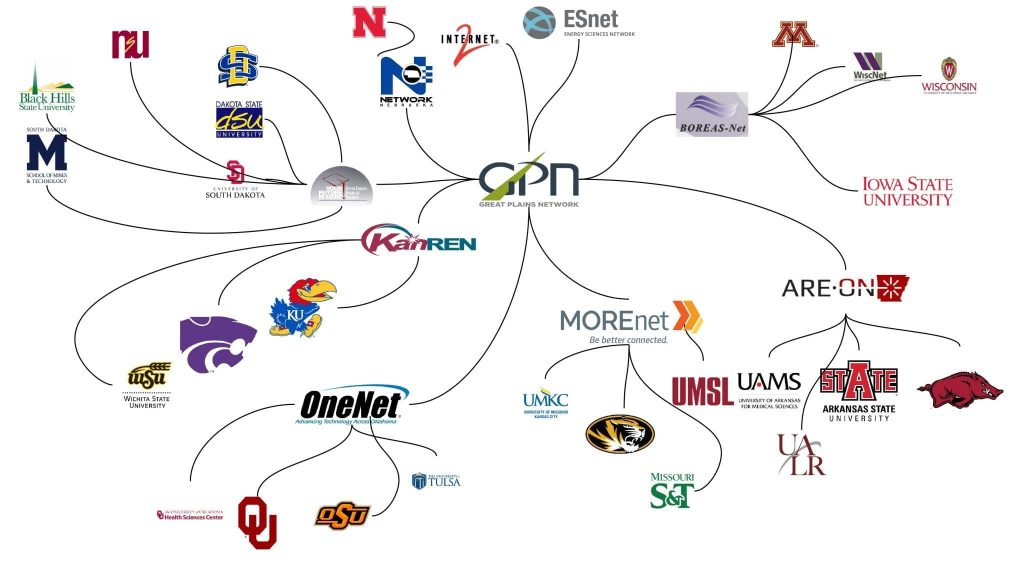 As a member of Internet2 and GPN, OneNet is able to provide access to robust, high-speed connectivity for Oklahoma researchers. Without access to this network, our state’s researchers would not be able to move the massive amounts of datasets that are pushed daily.

The high-speed connectivity is not the only benefit to OneNet’s partnership with GPN. The network offers more bandwidth at less cost for research organizations and creates an atmosphere of collaboration between organizations across the United States. Deaton said it also helps aggregate cost while bringing millions of research dollars into the state over the last 20 years.

“GPN’s 20-year collaboration has built a high degree of trust among its members, allowing us to make complex technical and strategic decisions quickly,” said Bill Mitchell, GPN executive director. “This puts GPN in the forefront of most major collaborative network-related initiatives, and as a result, the researchers at our member institutions benefit greatly by being much more competitive for research dollars.”

In celebrating the accomplishments over the last 20 years, it is important to look back at how GPN was formed. In 1996, representatives from seven states, including Oklahoma, met to strategize how to best evolve MIDnet through the Next Generation Internet Program, a U.S. government program intended to increase internet speeds. MIDNet was the first National Science Foundation (NSF) grant recipient to form a regional network that became fully operational. Through planning and collaboration with MIDNet, an additional NSF grant was awarded in 1997 to create GPN and interconnect with Internet2.

Throughout the next two decades, GPN grew from a single 155 megabit-per-second connection to Internet2 to multiple 100Gbps connections to Internet2. This includes connections to the Department of Energy’s Energy Sciences Network and a variety of research laboratories. Additionally, schools, libraries and many other community organizations are now able to take advantage of the GPN infrastructure. Researchers and educators across the region meet annually to explore opportunities to leverage the collaboration and the connectivity to further initiatives within each state.

By leveraging collaboration and connectivity in Oklahoma, OneNet is able to meet the mission critical needs of our state’s organizations. Partnering with GPN is just another way OneNet maintains partnerships that benefit the entire state while saving valuable dollars.

The Great Plains Network (GPN) is a non-profit consortium aggregating networks through GigaPoP connections while advocating research on behalf of universities and community innovators across the Midwest and Great Plains who seek collaboration, cyberinfrastructure and support for big data and big ideas, at the speed of the modern internet. “GPN’s 20-year collaboration has built a high degree of trust among its members, allowing us to make complex technical and strategic decisions quickly. This puts GPN in the forefront of most major collaborative network-related initiatives, and as a result, the researchers at our member institutions benefit greatly by being much more competitive for research dollars.” -Bill Mitchell, GPN executive director Learn more at www.greatplains.net.