This story is by Mack Burke, OSU Editorial Coordinator. Story and photos published with permission from Oklahoma State University. Read the full story at: https://news.okstate.edu/articles/communications/2021/osu_primed_to_lead_big_12_with_new_esports_arena.html

Pop quiz: What sporting event attracted the most viewers in FY 2019? If you answered the Super Bowl, then you’d be wrong. While the NFL’s season finale brought in over 98 million viewers, that distinction went to … a video game tournament.

With nearly 100 million unique viewers — most through streaming services like Twitch — the “League of Legends” World Championship finals achieved something that would’ve been unthinkable just 10 years ago. It was a remarkable moment, but it was no one-off. The skyrocketing popularity of esports — a broad term encompassing the vast universe of online gaming — is not a fad; it’s a movement. And OSU has now entered the arena.

Much more than a playground 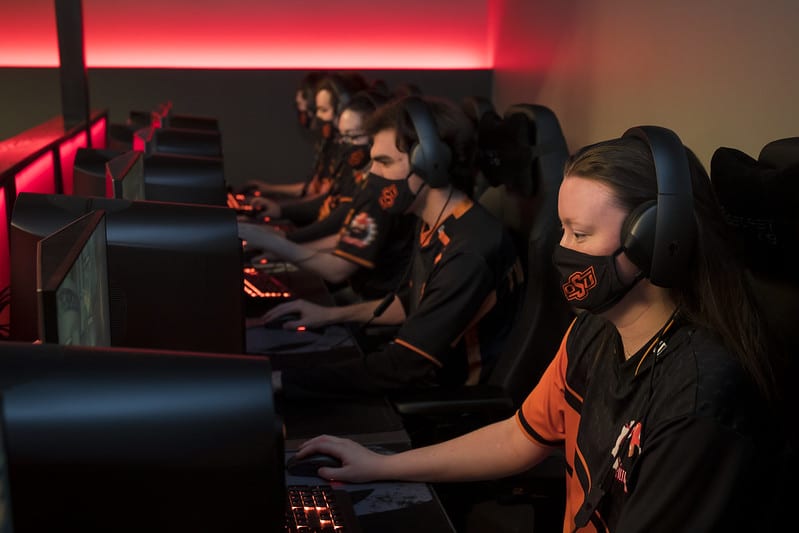 This spring, OSU opened a brand-new, state-of-the-art esports arena in the Student Union. With 40 high-powered PCs, a Twitch station, green screen and a slew of other amenities, the 1,690 square-foot arena is a gamers’ playground. But it’s a lot more than that.

“We’re primed to be the Big 12 leader,” said Adam Barnes, Student Union assistant director of meeting and conference services. “There’s nobody we know of that is as far along in terms of a dedicated esports arena — not some computer lab out in the corner of campus somewhere, but a dedicated space. We strategically chose the Student Union because it’s the heart of campus.”

For OSU esports, the arena represents a giant leap, and its potential impact extends far beyond its walls. Varsity Esports Foundation Executive Director Bubba Gaeddert, an OSU alumnus, said universities are seeing a major return on these kinds of investments in recruiting, potential sponsorships and brand awareness.

“There’s no ceiling on it,” he said. “It’s the fastest-growing industry in the world. Strictly competitive esports marketing is valued at almost $2 billion, but the ecosystem around gamers who are also influencers is a $25 billion industry. And that’s not even including the broader gaming industry.”

Gaeddert’s fellow OSU alumnus Bill Young, head of games at Twitch, said OSU already has strong programs that could easily feed into an esports/ gaming curriculum. Having an arena is another major boost to OSU’s allure as a destination for young people looking to build their future in the gaming world.

“Esports is one important component of a much larger gaming industry,” he said. “In fact, at $180 billion [in revenue] in 2020, video games are now bigger than movies and North American sports — combined.

“There are over 260,000 people employed in the video game industry, a number growing by almost 5 percent per year in the U.S. The disciplines needed by the gaming business are remarkably varied, ranging from art and design to computer programming. But don’t forget about business, architecture, finance, IT/IS, marketing and public relations. Universities worldwide have already recognized this as a significant growth area and are now competing for the best and brightest who are dedicated to building careers in the games business.”

The arena’s roots can be traced back to a cross-country road trip in the summer of 2018.

Shaun Noll, the Student Union meeting and conference services manager who serves as the full-time advisor for the largest student group on campus — Gamers of OSU — set off with a Cowboy contingent in search of universities that were “doing esports right.”

Noll, accompanied by Barnes, Student Union Senior System Administrator Chris Conway and then-Student Union Director and Assistant Vice President Mitch Kilcrease, wanted to see if a robust esports push would make sense for a Power 5 institution. On the road, they looked for inspiration at the University of Utah, Boise State University, University of California-Irvine and the headquarters of gaming giant Blizzard Entertainment.

“As we went on this tour, we realized that esports definitely fit on college campuses, but it really fit with student affairs,” Barnes said. “Inclusion, retention, engagement … it checked all of the boxes. It brought people together.”

Noll and Barnes saw tremendous potential and decided to get students involved. So they took a follow-up visit to the West Coast in 2019 with new Student Union Director Tracie Brown, Student Union IT Assistant Director Mike Peaster, Student Union Multimedia Producer Coleton Gambill and four officers from the Gamers of OSU club. They returned to Blizzard headquarters and esports heavyweight UC-Irvine. By the time they headed home, they had a crystallized vision for the new arena, and construction began in the fall of 2019.

Brown isn’t a gamer, but she said backing the arena project was an easy call once she saw the potential firsthand.

“What was our ‘why’? Really it comes down to one thing for me: We are here for the students. We know this is going to be a recruiting tool, but we also know that it’s going to provide opportunities for retention. An engaged and involved student is going to stay.”

On top of that, she said the esports arena is a truly inclusive space — a place to belong.

“Esports transcends everything,” she said. “From an inclusive perspective, it runs the gamut. There’s no limit. That’s exciting to me.”

The arena is located in the Cowboy Underground, in a space that Barnes said had been underutilized. Instead of just a reimagining of that space — which at one point was a bowling alley — the esports arena has transformed it into something completely new and different.

“It gives us an opportunity to engage our students and be on the cutting edge of something that’s extremely popular and inclusive,” Noll said.

Brown is quick to credit her predecessor and the many people who helped bring the project to fruition, like Noll and Barnes, as well as Conway, who handled the installation and configuration of technology, and Student Union Building Operations maintenance staff member Al Maxwell, who did the majority of the construction and brought forward design recommendations. Noll said the project wouldn’t have been possible without the Student Union leadership, the Student Affairs Office and the backing of leadership. And, of course, the students.

Gamers of OSU President Sam Williams said the planning process was very student-oriented and the group’s feedback was incorporated at every step along the way.

“Of course, the arena is an amazing opportunity for students and faculty of OSU to be able to partake in a common interest and meet like-minded individuals,” Williams said. “That fits into our club’s goals as a student organization and nonprofit. The gaming arena is much larger than that, however, as it represents OSU recognizing and jumping into the esports industry.” 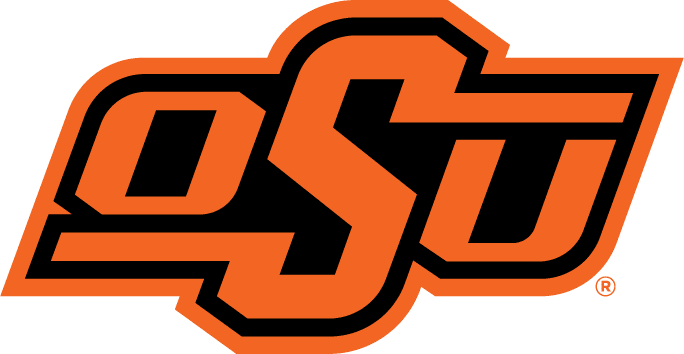