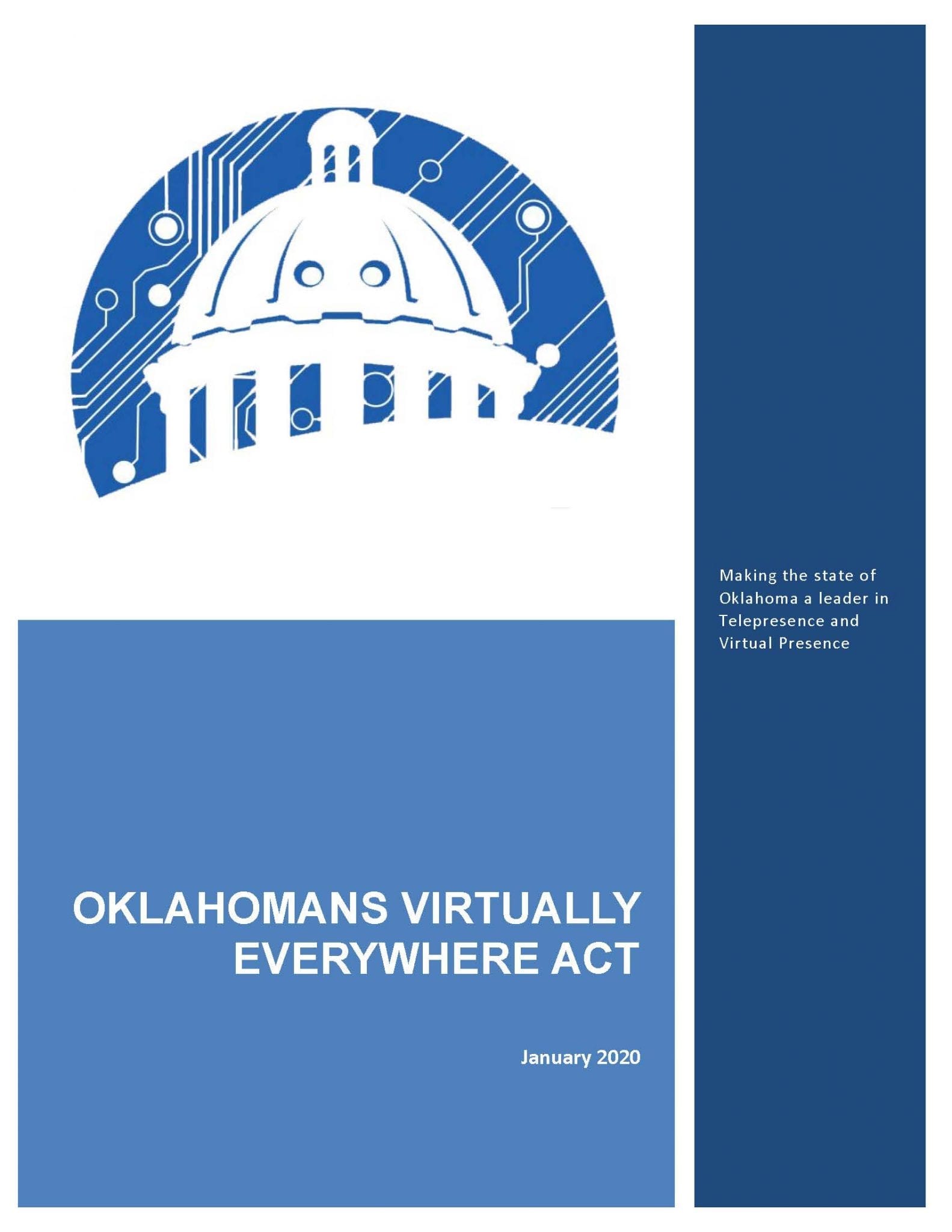 The Oklahomans Virtually Everywhere Act of 2019 (House Bill 1921) created a statewide initiative to make Oklahoma a leader in telepresence and virtual presence by allowing Oklahomans to provide their expertise, knowledge and instruction throughout the world without leaving their communities.

A statewide telepresence network, along with a host of comprehensive stakeholders, offers expanded opportunities for impactful education and public outreach. Teaching frequently takes place in locations of aesthetic or cultural interest; such sites are often highly engaging and represent ideal opportunities for educators, public representatives and industry leaders to capitalize on public interest. However, the absence of an infrastructure network and competing priorities often curtail these activities or compromise objectives.

Access to reliable telepresence technologies, infrastructure and services should not be a privilege in the 21st century and should not depend on where you live in the state of Oklahoma. Defining organizations, resources and/or access will assist specific efforts in expanding critical service to the state and those who need it most.

This is why a telepresence statewide network and subsequent technologies pertaining to telepresence and virtual presence are so vital. In the era of hypersensitive concerns of pandemic threats, the development of a statewide network to allow key staff to work from home through telepresence is vital to delivering state services to citizens. Rapid two-way information transfer is poised to dramatically change the quality, rate and reach of knowledge and communication; limitations of time, space and data processing can be minimized, and a broader group of educators, scientists, state policymakers, industry innovators and the global public can be involved. But these initiatives can only be realized through strong partnerships.

Representatives from the participating agencies created the Oklahomans Virtually Everywhere report to provide legislative and community leaders information on the status of telepresence and the need for a dedicated network in Oklahoma, in addition to the saliency of emerging technologies that will make Oklahoma a leader in telepresence and virtual presence. The report also outlines a pilot program for expanding an adult education program virtually everywhere.

The participating agencies’ plan is to build upon this report to create initiatives that expand telepresence and virtual presence in education, business, government and rural communities.

Next steps for the Virtually Everywhere working agencies include:

The vision of the Oklahomans Virtually Everywhere Act is to empower Oklahomans to provide their expertise throughout the world without leaving their communities. This report is the first step in advancing that vision to citizens across the state.