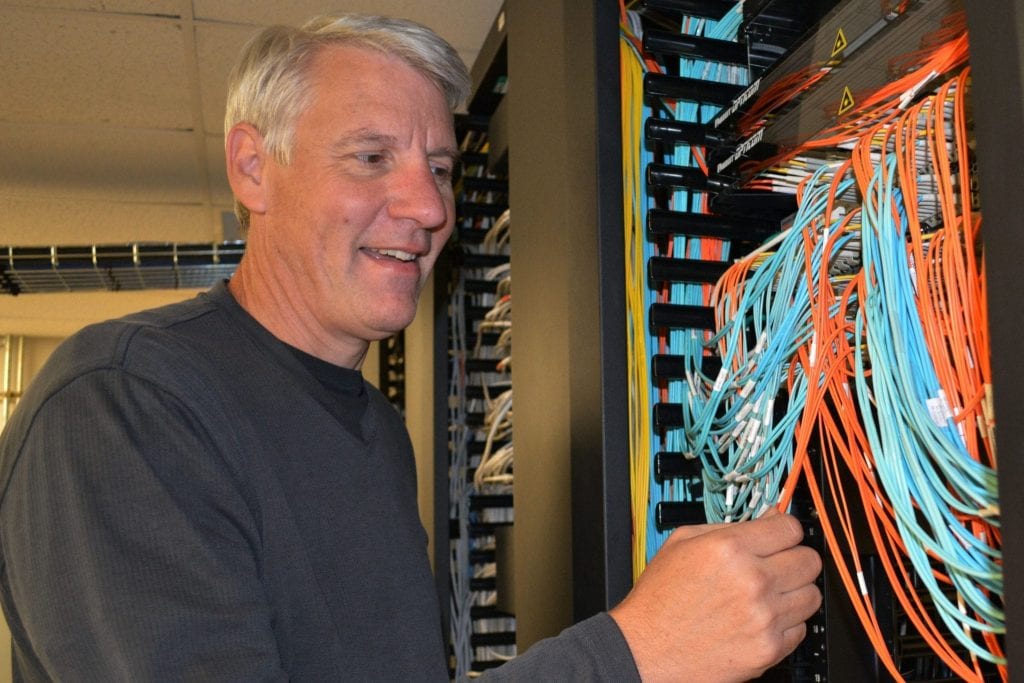 What do basketball, beekeeping and computer programming have in common? Frank Hedges.

Hedges is OneNet’s data center manager and storage architect. In simple terms, he’s the security guard of all of the important information.

“I manage the data center in terms of power cooling, connectivity and managing all of the vendors we work with.”

For Hedges, that means that on a daily basis, no news is good news.

“The biggest thing I do is make sure that nothing is going on in the data center. I make sure there aren’t any alerts or alarms.”

He is also in charge of Desire2Learn.

Hedges has been with OneNet for eight years, but has been involved with computer programming for most of his life.

In high school, his computer teacher was also his coach, and Hedges was tasked with creating a computer program to track basketball statistics. From there, he was hooked—and the rest is history. He went on to obtain a degree in programming from Oklahoma State University and has worked in the field for his whole career.

Technology is an evolving field, and Hedges has witnessed and been involved in it during every stage in the past 20 years.

“Networking, storage, and software have really developed since I first started,” He said, “When I was in high school we were using cassette tapes to record data on. We were using TSR 80’s and old apple computers.”

The growth of technology means that he and everyone else in his career field are constantly learning. It keeps him on his toes by forcing him to learn new thing and requires that he be engaged with his job.

If you talk to Hedges about his interests, it’s clear that his passions and priorities are found in enjoying his family. His face beams as he discusses the outdoor activities he and his daughter do together, like hiking, camping and other adventures through a program called Venture 2021.

Hedge’s son is in the military, his daughter is planning to study music and his wife is a former school teacher. Their interests are all over the board, but Hedges has great joy in discussing all of their different talents and passions.

Hedges also has another interesting and unexpected skill on his resume—beekeeping. When he was younger, his dad was a farmer, and the bees offered pollination for his crops. So Hedges went to the least likely place to start their beekeeping venture,

“You wouldn’t believe this, but we actually ordered our first hive out of a Sears catalog.”

He and his father kept over 50 beehives up until his junior year of college.

Like most OneNet employees, his favorite part of the job is the friendships he develops with fellow coworkers.

“I really enjoy the times outside of work, like the cookout we did. We didn’t die from smoke inhalation, but it was close.”

A conversation with Frank just highlights what so many people love about OneNet too—the people.

“I enjoy the comradery from interacting with everyone outside of the work environment. They’re all good people professionally and personally.” 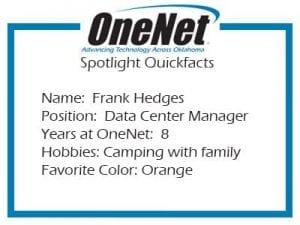