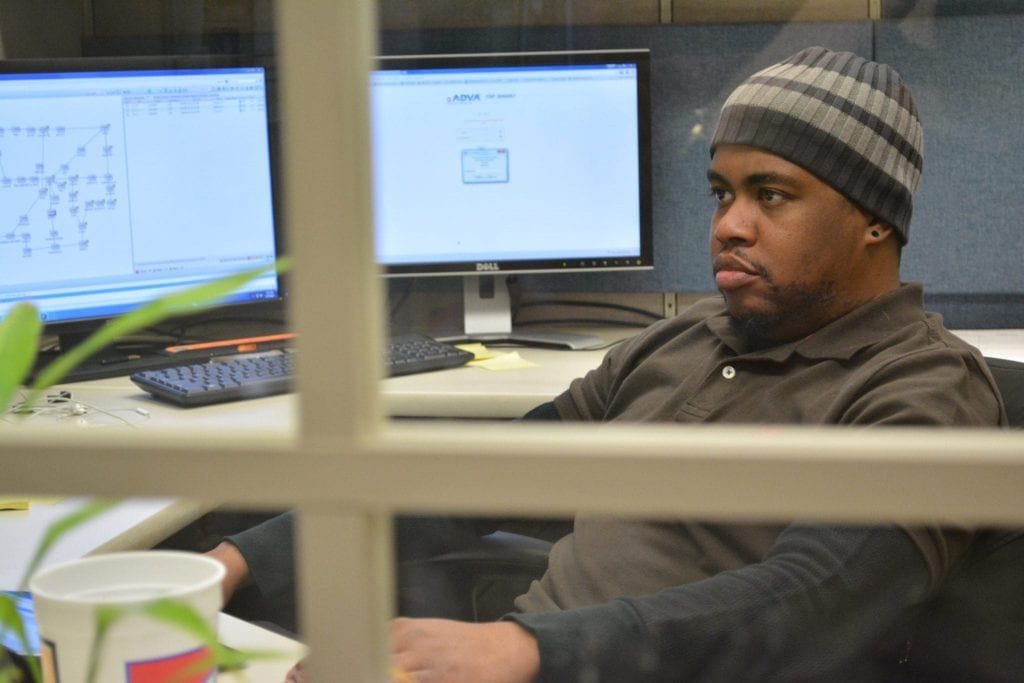 If you ask most people what an optical specialist is, they would probably stare back at you blankly.

It’s a quick way to tell people what he does without getting too technical.

“I tell people what I do, and their next question is usually, ‘Can you hook me up?’” Bruce said.

A better way of explaining Bruce’s job is to say it’s his job to ensure the thousands of miles of optical fiber in OneNet’s network are in perfect physical condition.

Bruce is an expert now, but if you would have asked him what an optical specialist is 20 years ago, he might have stared at you blankly.

As a child, Bruce enjoyed tearing things apart and rebuilding them.

But growing up in Peoria, Ill., Bruce never expected to end up where he is now. “In the 6th grade I took an aptitude test, and it said I should be a cable installer,” Bruce said.

“But I wanted to be a journalist when I grew up.”

He joined the military after high school and planned on studying journalism at college with the financial aid the military provides.

“When I joined the Air National Guard in Illinois, they gave me three choices for a job:  cook, telecommunications or paratrooper,” Bruce said. “I didn’t want to cook, and definitely wasn’t going to jump out of any airplanes.”

That left Bruce as a telecommunications specialist.

“Originally, I planned on going to school, but I started working in telecomm and loved it,” Bruce said.

After a while working for the National Guard, Bruce tried finding work in his hometown. But he eventually moved to St. Louis, Mo. for work because Peoria was too small for a telecommunications industry.

Ten years after moving to St. Louis, Bruce made his final move to Oklahoma City for his family.

“I had a son in Oklahoma, and I wanted to be a bigger part of his life,” Bruce said.

Since moving to Oklahoma and coming to work for OneNet, Bruce’s relationship with his 9-year-old son has grown exponentially.

“My house is close to his, so I see him every day,” Bruce said.

“He’s the one in his house who figures out the computer and shows his mom how to run the TV,” Bruce said. “He wants to be an astronaut when he grows up.”

“I always tell him anything is possible.”

Bruce lives that mantra through his work with OneNet.

“I always try to learn something new while I’m at work,” Bruce said. “My work here has shown me new things every day.”