Keeping Metro Tech’s five campuses connected to each other and the outside world is the responsibility of Matt Campbell, director of information technology services. Matt’s department must ensure service for Metro Tech’s student information systems, learning management systems, website, online courses and other technology applications.

In addition to addressing the campuses’ limited connectivity, Matt was also concerned about disaster recovery for the Metro Tech network. If a natural disaster, hardware failure or an attack on the system brought down the Springlake campus, the entire network would go down.

“We have to be forward thinking,” Matt explained. “In the case of a disaster, my staff has to plan for how we keep our business going and continue to serve our students.  The network is a critical part of that plan.”

Matt proposed a meshed WAN for their five campuses that supported varied connection speeds, Multiprotocol Label Switching (MPLS), Domain Name Services (), and the ability to define Quality of Service (QoS). The new network would also feature 200 Mb Internet access through both the Springlake and South Bryant campuses, making the South Bryant campus an alternate path for Internet access in case of a disaster. Metro Tech would fund the upgrade through E-Rate and the Oklahoma Universal Service Fund.

OneNet had the opportunity to submit a bid for the proposal. OneNet was already providing Internet service for part of the campuses, but some campuses were using other service providers. If selected for the project, OneNet would become Metro Tech’s sole Internet service provider. Metro Tech would be OneNet’s first MPLS project, and the OneNet team could meet all of Metro Tech’s requests thanks to a recent network upgrade of our own.

Ultimately OneNet won the bid, because we could meet all of Metro Tech’s functionality requests. We were the only service provider who could offer continuous 200 Mb Internet access for the South Bryant campus. That was a key priority for Matt.

OneNet had just over four months to build-out the new network configuration, which became operational July 1, 2012. With the new MPLS system, all five campuses can now communicate directly with each other, rather than being routed through the Springlake Campus. If one line in the system goes out, the campuses will have other routes for connecting to the main hub and each other. This redundancy also means the entire system is not at risk if a disaster occurred at Springlake.

“We’re now integrating a lot more media into our curriculum. Utilizing video, photos and other media into education as a whole has increased our bandwidth needs,” Matt said. “This would bottle-up our old network. With the upgrade, we’ve quadrupled our access to the outside world, opening up more resources for students.”

Matt reports that Metro Tech has had no downtime since the new network was implemented. He also feels satisfaction in knowing that with OneNet’s help his department has added speed enhancements across the network for about the same cost as they were paying for their previous services.

The Metro Tech network upgrade is a great example of how OneNet can provide leading-edge technological solutions that support the mission-critical needs of our educational partners. Through partnerships, such as this one, OneNet enhances education in Oklahoma’s communities and advances economic development across our state. 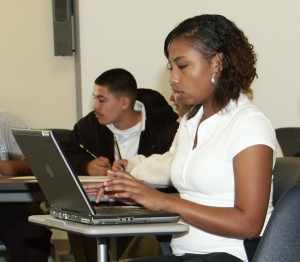 "With the upgrade, we’ve quadrupled our access to the outside world, opening up more resources for students.”