In October 2012, when Internet2 announced its upgrade to a 100G-enabled network, OneNet jumped ahead of the scheduled launch and was the first member network to make the connection. By leveraging the new upgrade, OneNet can ensure Oklahoma’s network capabilities will keep pace with the state’s research and education initiatives. In Oklahoma, major research projects depend on high broadband capabilities for large data movement, and one of those projects touches the everyday lives of people across the state and the nation.

Each spring, the Center for Analysis and Prediction of Storms (CAPS) at the University of Oklahoma (OU) runs an ensemble of high-resolution weather prediction forecasts covering the continental United States. This ensemble of forecasts, known as the Storm-Scale Ensemble Forecast, is part of the annual Spring Experiment, a collaboration among CAPS and research and operational units of the National Oceanic and Atmospheric Administration (NOAA) at the National Weather Center (NWC) at OU.

“A forecast ensemble consists of 25 or more member forecasts, each with unique features so that meteorologists make more accurate forecasts of severe weather that affects Oklahoma and the nation,” explained Keith Brewster, associate director and senior research scientist for CAPS. “No forecast is perfect, but by combining the results from many forecasts into a consensus forecast, many of the sources of error can be reduced.”

According to Brewster, the CAPS ensemble of forecasts is unique compared to other forecasts around the world because of the number of forecasts run, the use of real-time Doppler radar data and the high resolution – one grid point every two-and-a-half miles across the entire continental United States.

Forecasts such as these require high-speed networks for daily data transfer during the six-week experiment every spring. The CAPS forecast ensemble is run at the National Institute for Computational Science (NICS) operated by the University of Tennessee, and data must be transferred from CAPS to NICS and back to the NWC each day. This data travels through local networks in Tennessee to Internet2 then through OneNet’s network in Oklahoma.

In the past, network capacity has limited data transfer to a select set of forecast graphics. OneNet’s new connection, along with increased network capacity in Tennessee and upgrades to OneNet’s statewide network and the connection into OU (as part of a National Science Foundation Cyber Connectivity grant led by OneNet, OU and Oklahoma State University), will change that by enabling the transfer of more complete data among the collaborating partners.

“With the increased network speed, we expect to deliver the full three-dimensional gridded data from some members of the forecast ensemble to the forecasters,” explained Brewster. “The scientists will now be able to interactively interrogate the forecast products and use more sophisticated visualization tools. They will no longer be limited by the pre-determined products. This is like going from a single two-dimensional X-ray image to a 3-D CAT scan.”

Research like the Spring Experiment truly touches everyday lives, and the technology OneNet brings to the state empowers Oklahoma’s researchers to take their work to the next level. By advancing technology and removing barriers to innovation, OneNet and its network partners are changing the future for the state of Oklahoma and the nation. 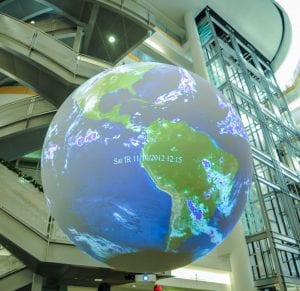