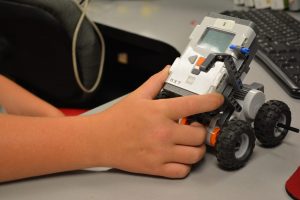 A classroom full of middle school students simultaneously experimenting with handmade robots, calculating physics equations for rocket launches and engaging in bioengineering projects, might seem a little chaotic. For students at Vanoss Junior High School in Ada, all of these projects, and many more, occur regularly in their science classes, but the scene is a lot calmer than you might imagine. These types of science lessons are made possible through Vanoss’ Science, Technology, Engineering and Math (STEM) lab, which is changing the face of traditional education.

In 2006 Vanoss Public Schools received a grant for a digital STEM lab to be used in the middle school. The lab includes several computers designated as stations for a specific area of study as well as any textbooks or interactive materials needed for the lessons. Students participate in learning activities on the same module for two weeks, then return to the classroom for one week to review concepts they’ve learned. This rotation occurs regularly throughout the year. Currently, Vanoss is only one of three schools in the state to incorporate the inventive digital program into regular curriculum.

The purpose of the STEM lab is to engage students in a variety of scientific disciplines in hopes of expanding their understanding of science, technology, engineering and math but also to provide them with a positive and exciting view of these fields.

While traditional learning atmospheres are necessary and beneficial, leaders at Vanoss view digital learning as crucial to their curriculum. Skylar Farrill teaches science at Vanoss Junior High and is also in charge of running the digital lab. He sees the lab as providing critical skills for students, no matter their future careers.

“We need students who are competent in digital skills because they are vital to a successful career in the future,” Farrill said. “I would be hard pressed to think of a 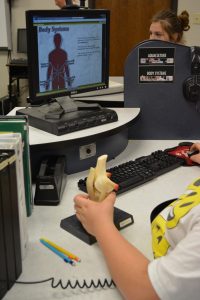 career that does not utilize technology.”

To enable a classroom full of students to participate in a multitude of internet-based projects simultaneously, Vanoss needs a network that matches their commitment to digital learning. Thankfully, as Oklahoma’s dedicated educational internet network, OneNet is uniquely equipped to serve their needs.

Reliable connectivity is the backbone of any school’s digital initiatives. Without a robust, secure internet connection, the STEM lab at Vanoss would essentially be rendered useless. Slow network speeds would prevent students from completing their assignments and ultimately inhibit their ability to master learning concepts. However, because of Vanoss’ high-quality internet connectivity, their innovation is supported by powerful and consistent network speed.

As part of the OneNet network, Vanoss’ dependable internet speed has allowed them to expand their dedication to providing students with state-of-the-art learning spaces. In the future, leaders at Vanoss are looking to potentially expand their STEM lab to include virtual reality devices, too.

“One of OneNet’s core tenets is to act as a foundation for digital innovation across the state,” said Von Royal, OneNet executive director. “By leveraging OneNet’s network for digital initiatives like the STEM lab, leaders at Vanoss are improving the future of our children and all of Oklahoma.” 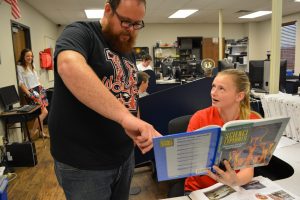 For students, the STEM lab offers a hands-on alternative to traditional education. While the lesson is digitally based, most of the stations incorporate some sort of physical device that connects to each computer. Students might have to design a small robot, create a functioning circuit board or model DNA. By providing students with an interactive learning space, educators at Vanoss hope to engage more students in STEM education, and potentially a successful STEM career, too.

For Isabella Lee, a Vanoss Junior High student, the STEM lab has reinforced her passion for science. When she grows up, Lee wants to become a veterinarian. Modules like genetics and body science have helped her develop a better understanding of a field she plans on pursuing.

For many others, the lab has helped generate interest and engagement in science. For a student who enjoys working with his hands, and hopes to one day become a mechanic, the labs offer a new hands-on, interactive way to learn.

While the wide-range of activities are able to encourage learning in a variety of different students, Farrill is able to better serve students with the help of the digital curriculum, too.

“One of the best parts of the STEM lab is the freedom I have to interact one-on-one with students,” he said. “I can give more specialized instruction to a student who is struggling since most of the generalized instruction is web-based.”

The benefits of the STEM lab are numerous, and educators at Vanoss Public Schools are continuously looking for ways to meet the individualized needs of students, while preparing them for the future. With a reliable internet foundation, schools like Vanoss are becoming trailblazers for the future of education. 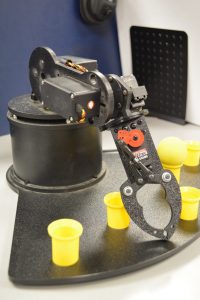 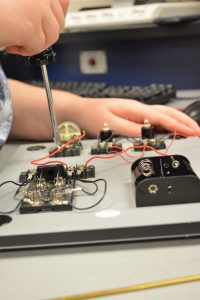 Vanoss Junior High School's stem lab involves numerous hands-on aspects to the station modules so that students can work directly with the subject they are studying. These items connect directly to their computer, and the internet-based curriculum incorporates the tangible objects with their online lessons.