Organizations often have varying missions, but the most common denominator in achieving those goals is reliable internet connectivity. For numerous community service organizations in Shawnee, Oklahoma, dependable connections are the backbone of all operations, from education and health care to tribal relations and city operations.

The essential nature of internet makes it a necessary monthly expense, but when a local university discovered the possibility of a citywide consortium to decrease costs and increase bandwidth for numerous organizations, OneNet was prepared to provide the resources needed to upgrade their network.

In 2012 Oklahoma Baptist University (OBU) became aware of grant-funded fiber being built through the city of Shawnee. Officials at the university quickly realized connecting directly to fiber would increase bandwidth availability while decreasing current costs, so they contacted OneNet, who manages the fiber.

Randy Smith, executive vice president for business and administrative services, saw the possibilities that the increased bandwidth and cost savings could bring to the delivery of education at OBU. A lower administrative budget would allow expansion in classroom initiatives while maintaining OBU’s commitment to affordable education.

“Immediately, we saw the benefit to OBU for additional bandwidth at a lower cost to better meet the needs of students and the university community,” Smith said.

Smith said he saw the potential for the community of Shawnee as a whole, too. The city is home to numerous institutions with similar missions that could benefit from the cost savings and increased bandwidth opportunities.  OBU representatives contacted leaders at St. Gregory’s University, Gordon Cooper Technology Center, Shawnee Public Schools, Citizen Potawatomi Nation, St Anthony Shawnee Hospital and the City of Shawnee. There was immediate interest from all organizations, so OneNet developed a project plan to upgrade their connections.

“Our number one priority is data capacity,” Skillings said. “Increased bandwidth expands our capacity and our ability to transmit data back and forth.”

Skillings said he also saw the economic benefits a consortium offered the hospital. Because OneNet would perform upgrades to all seven participants at the same time, the construction process would be exponentially more efficient. In addition, not only would monthly costs decrease, but some of the startup costs would also be shared amongst all organizations.

“All of us banding together made the process significantly more economical,” Skillings added. “We were able to make infrastructure considerations as a group that would have been redundant if we had done it on our own.”

An agreement was reached in 2015, and OneNet began construction. OneNet contracted with Dobson Technologies to bring fiber from the existing route to each location. To ensure reliability, OneNet used Vyve Broadband’s connections to create redundant paths. These public-private partnerships increased the expected savings for all consortium members.

The project was finished in July 2016. By streamlining construction and utilizing available telecommunications companies, OneNet was able to provide significant cost savings to every participating member while maintaining or increasing bandwidth.

While the consortium is a group arrangement, each organization has its own tailored connection to meet individual needs, with an expansion option up to 10Gbps. So as the city grows, the network can, too.

As the project comes to a close after four years of collaboration, leaders are already looking to the future, and the entire of city of Shawnee will benefit. Participants in the consortium impact almost every individual in the city, and leaders anticipate the new opportunities the consortium will generate.

“The savings of this partnership are allowing us to reinvest in significant classroom technology upgrades and expand our online presence in both undergraduate and graduate programs,” Smith said.

As cost-savings are generated, OneNet anticipates the new investments all of the consortium members will make into improving their city using their upgraded bandwidths or decreased costs.

“As an organization with a mission to empower communities, OneNet sees the city of Shawnee as a potential model for other cities, too,” said OneNet Executive Director Von Royal, “Because when community service organizations increase reliability and cost-savings, the whole community reaps the benefits.”

Have you used OneNet recently? And, what exactly is OneNet?

#YouUseOneNet and may not even know it. OneNet is the statewide internet service provider that keeps you connected.

Watch our video to see how you interact daily with OneNet! 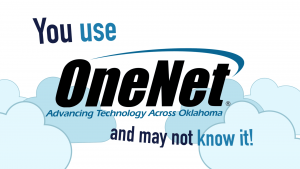